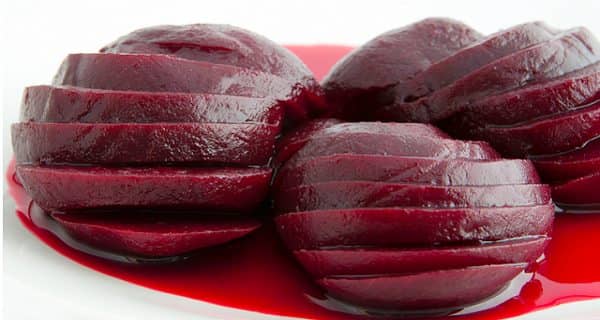 Known mostly as the vegetable with the highest sugar content of all, beets are actually a powerhouse of valuable nutrients and consuming them regularly can help you fight off a variety of ailments and diseases. Besides offering a sweet and earthy flavor that can be enjoyed on its own or used to enrich your favorite salad, beets pack a unique source of phytonutrients called betalains, most important and well-studied of which are betanin and vulgaxanthin.

Although you can find them in other foods as well, beets offer the biggest amount of these two phytonutrients with really powerful antioxidant, anti-inflammatory and detoxifying properties. In addition, beets are abundant with cancer-preventing anthocyanins, which give them their red color, contain cellulose and pectin, and are also full of important vitamins and minerals such as B1, B2, B12, C, copper, magnesium, potassium, iron, phosphorus and iodine.

All of this puts beets on the list of super-foods that have the ability to heal and prevent diseases and nourish multiple aspects of human health. More specifically, beets can boost blood flow, help treat anemia, regulate cholesterol levels, promote healthy liver function, decelerate aging, enhance digestion and decrease the risk of cancer and heart disease. Furthermore, beets are rarely outmatched when it comes to their ability to boosting athletic performance by increasing endurance and stamina.

We can say, without any fear of being overly dramatic, that beets are the best natural remedy for high blood pressure. In fact, drinking beet juice can help lower blood pressure in just a few hours. Imagine what beet juice can do for you if you drink it every day – oh wait, you don’t have to imagine it, because studies have already found that this practice can lower systolic blood pressure by an average of 5 points. The nutrients responsible for this benefit are the nitrates found in beets, which once ingested get converted into nitric oxide, a well-known vasodilator.

One study from the University of Exerter’s School of Sport and Health Sciences found that drinking beet juice prior to exercise helped subjects exercise up to 16% longer. The men who drank beet juice also had lower resting blood pressure after consuming it, compared to the group who drank currant juice. These results are only the latest addition to a growing pool of scientific data that confirms the potential of nitrate-rich food to significantly increase athletic endurance and stamina while also reducing free radical damage. According to the lead author, Professor Andy Jones, “We were amazed by the effect of beet juice on oxygen uptake because these effects can’t be achieved by any other known means.”

Most of the unique phytonutrients present in beets have been shown to function as anti-inflammatory compounds, largely thanks to their ability to inhibit the activity of cyclo-oxygenase enzymes. The betaine present in beets is also a powerful compound that can protects cells, proteins and enzymes in the human body from environmental stress and help prevent chronic diseases associated with inflammation such as several types of heart disease and type 2 diabetes. Although more research is needed before making final conclusions, existing studies have supported the claim that beets consumption provides innumerable anti-inflammatory benefits for all body systems.

Beets seem to have important anti-cancer benefits that demand serious in-depth investigation. Research has so far shown that the mighty combination of antioxidant and anti-inflammatory molecules in beets gives them an ability to reduce the risk of many cancer types, especially pancreatic, breast and prostate cancers. The valuable vitamins and minerals provided by beets also play an important role in combating free radicals which can damage DNA and cell membranes. Finally, the special types of fiber present in beets have been linked with decreased risk of colon cancer, while the phytonutrients which give beets its crimson color have shown similar risk-reducing effect in cases of lung, testicular and nerve cancer.

The previously mentioned betalains in beets support the crucial Phase 2 of the detoxification process in the liver, which is when broken down toxins are bound to other molecules and excreted from the body. Without this “hook up” process, toxins could not be neutralized and made sufficiently water-soluble to be excreted in the urine. Studies have found that the betalains in beets trigger the activity of an enzyme family called the glutathione-S-transferase family (GSTs), which aids the elimination of many harmful toxins. When your liver is able to detoxify chemicals and toxins faster and more effectively, your body is better able to rebalance your hormones, cholesterol and energy levels.

The ancient Romans knew beets as a natural aphrodisiac and used them frequently to improve blood flow to the genital area. In fact, beets have long been associated with sexuality and have been used for stimulating better erection for thousands of years, but nowadays we know that there’s more than just wishful thinking in this case, unlike with other foods touted for having similar powers. The high levels of nitrates in beets have the ability to increase blood flow, while boron, a trace mineral found in beets, directly stimulates the production of sex hormones in the human body.

Cashew Nutrition – Absolute the Best Treatment for Depression without Medication
Marijuana Gum For Fibromyalgia Pain Relief: would you try this?